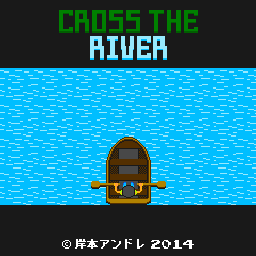 Cross The River is a small puzzle game that started out as a logic programming project, used as an example and exercise by our main developer in one of his Computer Programming 101 classes.

Instead of focusing only in the programming logic part, it was decided that work should also be done on the visual – art could be simple, but not relying on basic shapes, stick figures or third-party sprites, so the NES color palette and the console's 256×240 resolution were used as constraints to lead the art. The 'NEStalgic' feeling was also in mind while doing the sound effects.